While the gold standard is a thing of the past, the precious yellow metal is still a coveted asset. Many investors seek it out because it is still quite valuable, and it offers a way for them to diversify their portfolios. As such, many countries have gold reserves; some possess a larger amount of the metal than others. Every year, central banks all around the world add millions of tons of gold in order to boost their reserves.

In 1934 on January 30, the Gold Reserve Act of 1934 was signed by President Franklin Roosevelt. It was essentially the culmination of emergency banking laws and executive measures that Roosevelt passed during his first 100 days in office. It would take away the title of all gold and gold certificates being held by private individuals and institutions, like the Federal Reserve Bank. Afterward, it would transfer it to the Treasury of the United States.

At its core, the law was created to safeguard the United States’ system of currency. Moreover, it was to provide a better use of the U.S.’s monetary gold stock and for other purposes. It would effectively halt the free use of gold as money domestically and decrease the value of the dollar on an international scale.

With the Great Depression commencing and the international trade crumbling, the U.S. gold situation was becoming grim. Both domestically and internationally, an abundance of gold was flowing out from the Federal Reserve Bank vaults. The reason for this occurrence was the general reaction to a financial crisis. Most people, companies, and governments will lean toward hard currency over bank deposits or paper, whose value can unexpectedly drop. By March 1933, around the time when the Federal Reserve Bank of New York was unable to follow through on its commitment to convert the currency to gold, President Roosevelt announced a national banking holiday.

The Gold Reserve Act of 1934 would follow a string of other attempts to end the financial bleeding. Such attempts included the bank holiday, international gold payments suspensions, and a gold purchase boom by the Treasury. The Gold Reserve Act stopped all private usage and holding of gold as money. The government brought in gold being held by private hands and subsequently barred the Treasury from redeeming dollars for gold. It permitted the president to establish the dollar’s gold value by proclamation.

This concluded the classic Gold Standard period in financial history and marked the beginning of the United States being the primary intermediary of international money. It granted the government additional control over the domestic money supply. Moreover, it let the Treasury purchase gold on an international scale to devalue the dollar in foreign exchange markets even more.

Where is the largest stockpile of gold reserves?

In uncertain times, investors will flock to a ‘safe haven’ asset. In most cases, this particular asset is gold. Never has it been more popular than during financial crises such as the one sparked by the COVID-19 outbreak.

The ‘gold standard’ was abandoned decades ago, but central banks all around the world still hold the precious metal predominantly for its ability to offer stability. It is seen as comparatively less susceptible to economic or political volatility and, if necessary, it can be converted to cash. Before the pandemic was even on the world’s radar, the global economy was starting to show warning signs, prompting many countries to start hoarding gold.

Beginning in 2010, central banks worldwide gradually went from being net gold sellers to net gold buyers. In 2019, official sector activity saw a 1% decline from the previous year, with central banks adding 650.3 tonnes. This is slightly lower than in 2018 when banks purchased 656.2 tonnes.
Despite whatever has occurred during the last few years, the top 10 central banks with the largest gold reserves remain mostly unchanged. The United States currently holds the number one spot, with its vaults containing over 8,000 tonnes of gold. This amount is almost as much as the next three countries combined, which are Germany and Italy. Despite the U.S. holding the largest gold reserves, other countries are continuously adding to their reserves and some even have access to domestic gold sources.

The United States Bullion Depository (aka. Fort Knox) is a fortified vault building operated by the United States Department of the Treasury. It is located near the United States Army post of Fort Knox, Kentucky. The purpose of the vault is to act as storage for a large portion of the country’s gold reserves along with other precious items belonging to the federal government or in their custody. It currently holds approximately 147 million troy ounces (4,580 metric tons) of gold bullion; this is over half of the Treasury’s gold.

The structure of Fort Knox consists of the following metrics:

Back in the 1930s, the construction’s cost was a mere $560,000. It is said that the roof is bomb-proof, and the main vault door is 21 inches thick, weighing 20 tons. The Treasury states that no one person knows the combination.

Along with gold and historical artifacts, Fort Knox also holds morphine sulfate. During the Cold War, the U.S. military wanted to make sure that it had a plentiful supply of pain medicine in case foreign opium sources were ever discontinued. In 1955, Fort Knox decided to include tons of opium into its storage. Later, in 1993, the government would spend millions in purifying the stuff into morphine. To this day, it is still stored at Fort Knox alongside the gold. 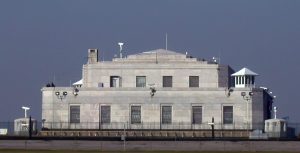 As stated before, the United States has the largest supply of gold with a total of 8,133 tonnes. During the peak of the Bretton Woods system of international exchange, the U.S. proposed that, in exchange for dollars, they house other countries’ gold. At this time, it was reported that 90% to 95% of the world’s gold reserves resided in American vaults. In the following decades, the U.S. would continue to hold the largest amount. In total, gold makes up over 75% of its foreign reserves.

Germany has a gold supply of 3,363 tonnes. The country only keeps roughly one-third of its gold reserves. Almost half of the supply is kept at the U.S. Federal Reserve Bank branch located in New York. An additional 20% can be found in either Paris or London.

Italy’s gold supply is approximately 2,452 tonnes. The eurozone crisis has resulted in Italy’s government being called to sell some of its gold reserves to raise funds. However, the government claims that it does not plan to sell the reserves.

The gold supply in France is 2,436 tonnes. Former President of France, Charles de Gaulle, had a hand in the Bretton Woods system’s complete collapse when he began trading dollars in for gold deriving from the Fort Knox reserves. The U.S. president at the time, Richard Nixon, was aware that the fixed rate of $35 per gold ounce was too low, forcing him to take the U.S. off the gold standard. This is what put an end to the dollar’s ability to automatically convert to gold.

With a current gold supply of roughly 2,300 tonnes, Russia took China’s place as the fifth-largest holder of the precious metal in 2018. The increase in its stores was an attempt to incorporate diversity from American investments. For the most part, Russia sold U.S. Treasury bonds as a means to purchase the bullion.

China has a gold supply of up to 1,948 tonnes. In the summer of 2015, the People’s Bank of China started to share its gold purchasing activity monthly. This was the first time they had done it since 2009. Even though China holds the sixth spot for most gold held, the precious metal accounts for only a small percentage of its overall reserves, a mere 3.4% to be exact. In fact, since December 2018, China has been on a buying spree and purchased nearly 100 tonnes from then to August 2019.

Switzerland takes seventh place with a supply of 1,040 tonnes. The country has the world’s largest reserves of gold per capita. While World War II was taking place, this neutral country found itself in the spotlight of the European gold trade, conducting transactions with the Allies as well as Axis powers. Nowadays, a majority of its gold trading is with China and Hong Kong.

Japan is the world’s third-largest economy and has a gold supply of 765 tonnes. The country is also the world’s eighth-largest hoarder of the precious metal. Its central bank is considered to be one of the most forceful practitioners when it comes to quantitative easing, which has aided in the increasing demand for gold. Moreover, in January 2016, it was successful in lowering interest rates below zero.

India’s gold supply is approximately 658 tonnes. The Bank of India has one of the largest reserves of this precious metal in the world. This country, home to 1.25 billion people, is the second-largest consumer of gold, as well as one of the most trustworthy drivers of international demand. The wedding and festival season in India, typically running from October to December, has proven to be a huge advantage for the gold trade.

The gold supply of the Netherlands is 612 tonnes. In 2014, the Netherlands deported 20% of its gold reserves from the New York Fed vaults to Amsterdam. Later, in 2019, the Dutch National Bank referred to gold as an “anchor of trust” and an ideal piggy bank for the financial system in case of an economic disaster.

What is an American Gold Eagle?

How to Sell Gold Coins for Cash

Where Does Gold Come From?

Ways to Invest in Gold

Make an investment in GoldCoin

Now that you know more about gold. Isn’t it a perfect time to buy today?